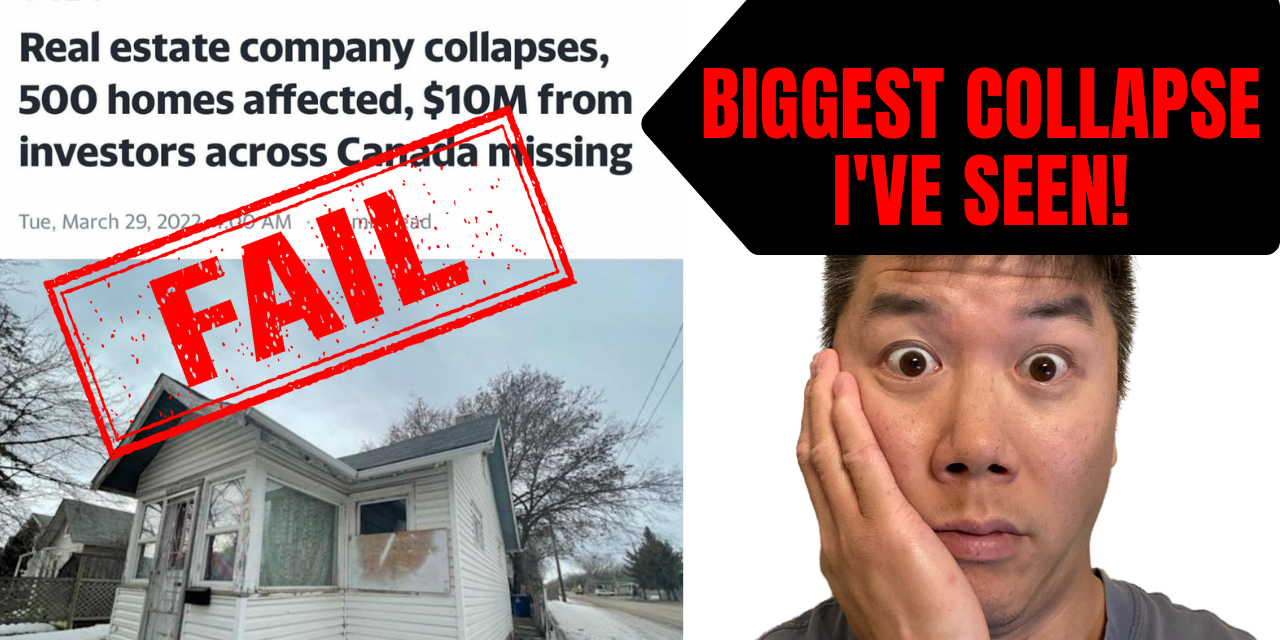 I shared an article on my Facebook and Instagram last week from the CBC about Epic Alliance’s collapse.

If you’re unfamiliar with the story from the article:

I first learnt about issues at Epic Alliance back in December when we had the guys from the Financial Independence Garage on the show. The Mechanic, a pseudonym to hide his true identity from his employer, shared there was a hiccup with his investment with Epic Alliance.  He didn’t want to get into details which is fine, and I put that away in my mental database for red flags.

Personally, I’m very risk-averse, I have new opportunities coming my way every week, and knowing how the best of the best invest thanks to my decade-plus of networking, interviewing successful folks here on my podcast and masterminding with 7-8 figure entrepreneurs and investors with 8 figure net worth… you come to realize “it’s all relative” after looking at a lot of deals like I have since 2008 being a part of organized real estate.

Since 2008, I’ve witnessed several epic collapses of real estate investment companies. Some small, some still in court for hundreds of millions. Several private lenders, even mortgage brokerages who originated the private lending, have deals go bad.

As Warren Buffet said, “only when the tide goes out do you see who’s swimming naked.”

My first exposure to an epic collapse was a husband and wife investor who taught about joint ventures and was promoted by an organized real estate networking group. Let’s call them “Mark.”  Mark had over 50 properties with joint venture partners; he would speak from the stage of his experience and how to raise capital.  Mark contributed to the organization’s joint venture education program.

Then as Warren Buffet describes it, the tide went out in 2009 during the financial and credit crisis and recession. The naked moment was Mark had taken out a blanket second mortgage of many of the investment properties, and he used the lawyer who was a sponsor of the organized real estate networking group. This was 2009.

I started taking real estate very seriously in 2008 after already owning a couple of houses with partners. However, this event opened my eyes to how even influencers can not be trusted.

In speaking to friends who had invested with Epic Alliance, the passive investors are now actively scrambling and taking over control of the properties, their experiences working with Mark I’ve seen repeated many times since then.  Investors and business owners have great ideas and visions; executing small like 5-10 properties goes fine, scaling beyond gets progressively hard with more variables like tenants, contractors, staff, etc.

Each of those variables is a challenge in itself.

Add to that time and cash flow pressures, e.g. if you are a private borrower, some have made the mistake of starting the clock on interest payments when the private mortgages are signed. This places pressure on the borrower to be doing business. No different than having salaried staff.

The lesson is to only start the interest clock.

Many bigger investors have shared with me the pressures of needed constant deal flow of investment properties to keep their salaried staff busy. Some even take on break-even projects to keep their staff busy so they don’t seek work elsewhere.

Add in tenant problems, a pandemic and a 500+ property portfolio like Epic Alliance’s, you have many moving parts.

I was chatting with a flipper client of mine in Hamilton about Epic Alliance on the weekend and how Rochelle, one of the owners of Epic Alliance, shared on her Instagram that she bought 10 houses in a single day.  My flipper friend who flips for a living had trouble getting his head around how many trades he’d need to pull that off.

The thing with tradespeople is, we’re in the middle of a housing boom, and they are in high demand and can get great jobs and benefits working for the union.

Note these are not turnkey houses. I’ve read and heard from those invested these are rough properties; many are boarded up in a not-so-nice part of town.

Not saying it’s impossible. I just don’t know anyone who could pull it off, and I know quite a few people… operational excellence would be needed, which is rare without high-priced talent.

From friends who’ve shared their experiences with me, one sold Epic Alliance a house for under $200,000. Then, out of curiosity, they pulled the title to find three mortgages that totalled just over 30% more than he had sold the property to Epic Alliance for.

Another client of ours, a new Stock Hacker, shared with me that the house she joint-ventured with Epic Alliance on and felt deceived by the appraisal she received that was 20% above market on a house that’s boarded up, not tenanted and needs a lot of work. So now, she has to take control of a property in Saskatoon, which she’s never been to before.

Not the easiest thing to do as the articles I’ve read state there are around 200+ properties that are not tenanted within this portfolio, so it could be months if these investors are lucky to start seeing some rent come in.

Now there are many lessons to be learned from here and questions. I do believe in innocence until proven guilty, but one red flag is enough for me to say “No, thank you” to even learning more about an investment.

Like Warren Buffet says, it takes a lifetime to build a reputation and mere minutes to destroy it.

Now, my questions are as follows;

Securities laws are quite clear around not soliciting investment from the public; speak to your lawyer about this.  How is a company with 500+ properties not listening to sound legal advice?

How many investors have never inspected their properties ever? For example, I have passive investments in a REIT, and I personally toured three of their apartment buildings, and that’s after being friends with the owners of the REIT for over ten years.

I’m told many of Epic Alliance’s properties were transacted privately, as in not on MLS nor Realtor.ca, which can be great for saving commissions. Still, those who participate are doing so without licensed professionals representing their best interests.  Not just Realtors, but what of the appraisers? When I get a mortgage with the bank, the bank chooses the appraiser.

In these private deals and private borrowing, who chose the appraisers? I know if I wanted inflated appraised values, I would hire an appraiser who would work with me.

I don’t have all the details, but there are definitely more than enough red flags for me.

For Cherry and me, our investing will remain the same, boring and predictable. We’ll own mostly duplexes ourselves without partners, some passive investments in our registered accounts in land development and apartment buildings REIT.

Stock Hacking for cash flow as our students in 2021, if they followed the shared trades to the T, would have achieved between 12-15% cash returns.  Past, of course, does not predict the future.

I know it sounds slow and boring, but I’ve never found a more repeatable path to getting rich and retiring comfortably.

If you’d like to be educated on the slow, best practices to getting rich, I can’t recommend you be on our email newsletters and attend our real estate or stock hacking events. Simply go to www.infinitywealth.ca/events to sign up!

Your future self will thank you!

TO LISTEN TO THIS EPISODE: https://www.truthaboutrealestateinvesting.ca/epic-fail-500-home-rei-company-collapses-tens-of-millions-lost/


PS. Our next Real Estate Meetupis this Saturday, April 23rd. We’ll be learning about Renovating for ROI and JV matchmaking. There’ll be plenty of opportunities to network with like-minded folks!

PPS. If you’d like to receive details of upcoming events so you don’t miss a thing, join my email list by filling out the form below.